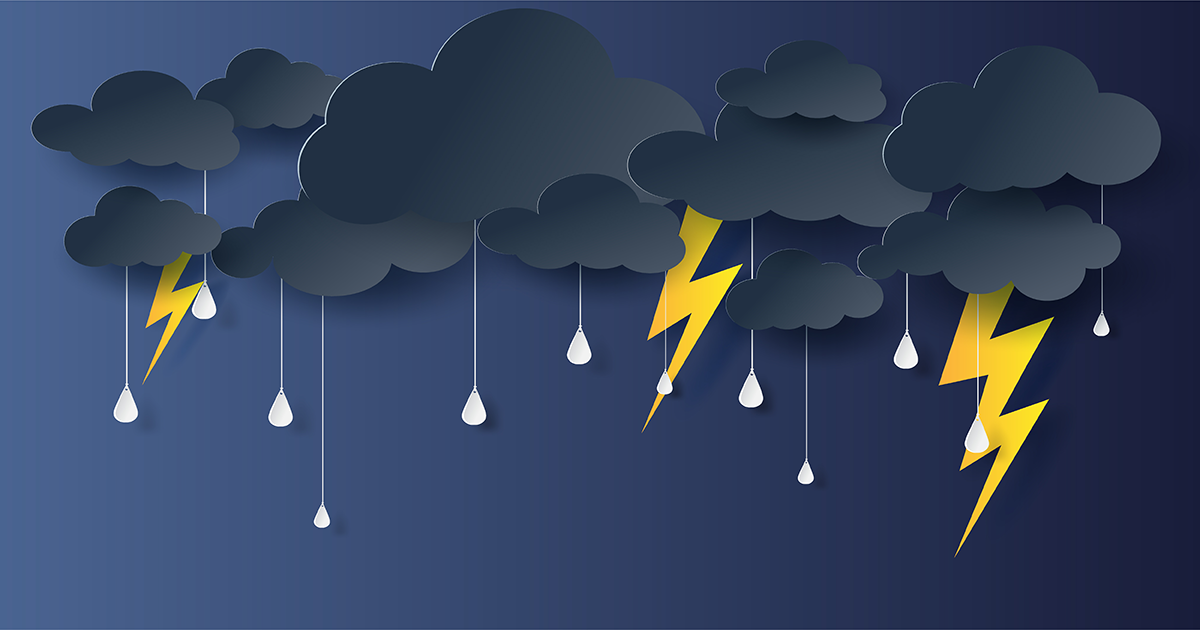 Data and the Doppler Radar: How the Census helps prepare for stormy weather

How does census data aid in handling a hurricane?

The data that the United States Census Bureau collects is useful in a variety of ways beyond simply understanding demographics. Many people utilize this information for governmental purposes, others for business decisions, but one area where the Census is instrumental is in the arrival of natural disasters such as hurricanes. During the yearly hurricane season, the demographics data that the Census gathers can be useful in highlighting areas that are particularly vulnerable to damage, might have more difficulty in evacuating, or will struggle in rebuilding.

A useful tool that the Census Bureau created recently that exemplifies this is My Community Explorer. 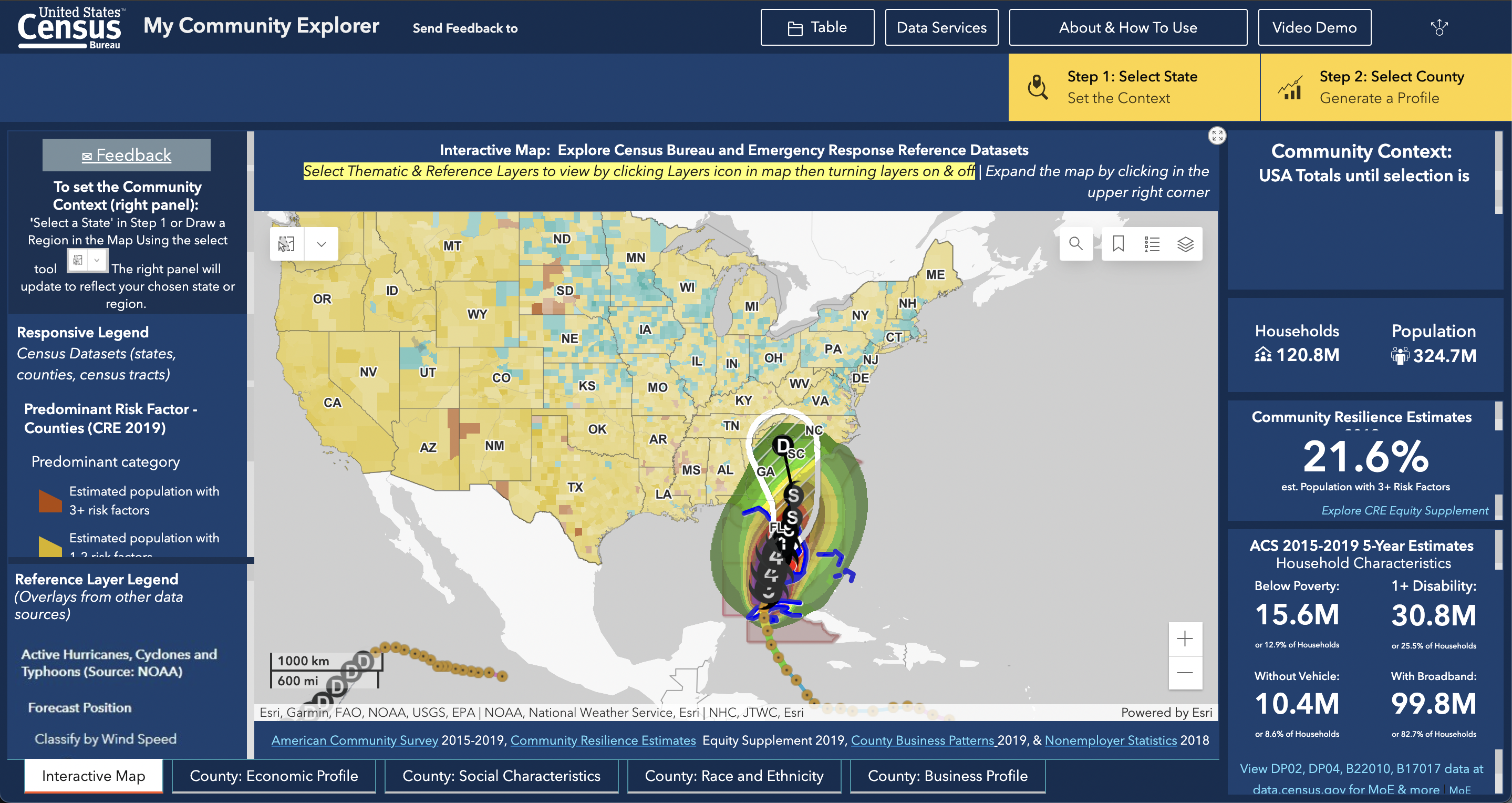 In the broadest sense, any data that the Census gathers can be useful, but as presented in the My Community Explorer tool, they've distilled a lot of this information into what they call "Community Resilience Estimates." These are based on factors that have the greatest influence on somebody's ability to brave any disaster that were to impact their community. These factors, as listed by the Census, are:

Several of these factors pertain to mobility: areas that are more likely to have people who lack transportation, are older, are more likely to have a disability that affects evacuation, and so forth (These specifics can be examined here.) This all culminates in the Community Resilience Estimates which identify what percentage of a population lacks any risk factors as opposed to percentages that have 1-2 and then 3 or more. It boils down to highlighting, based on census data, which areas are most vulnerable to these natural disasters. 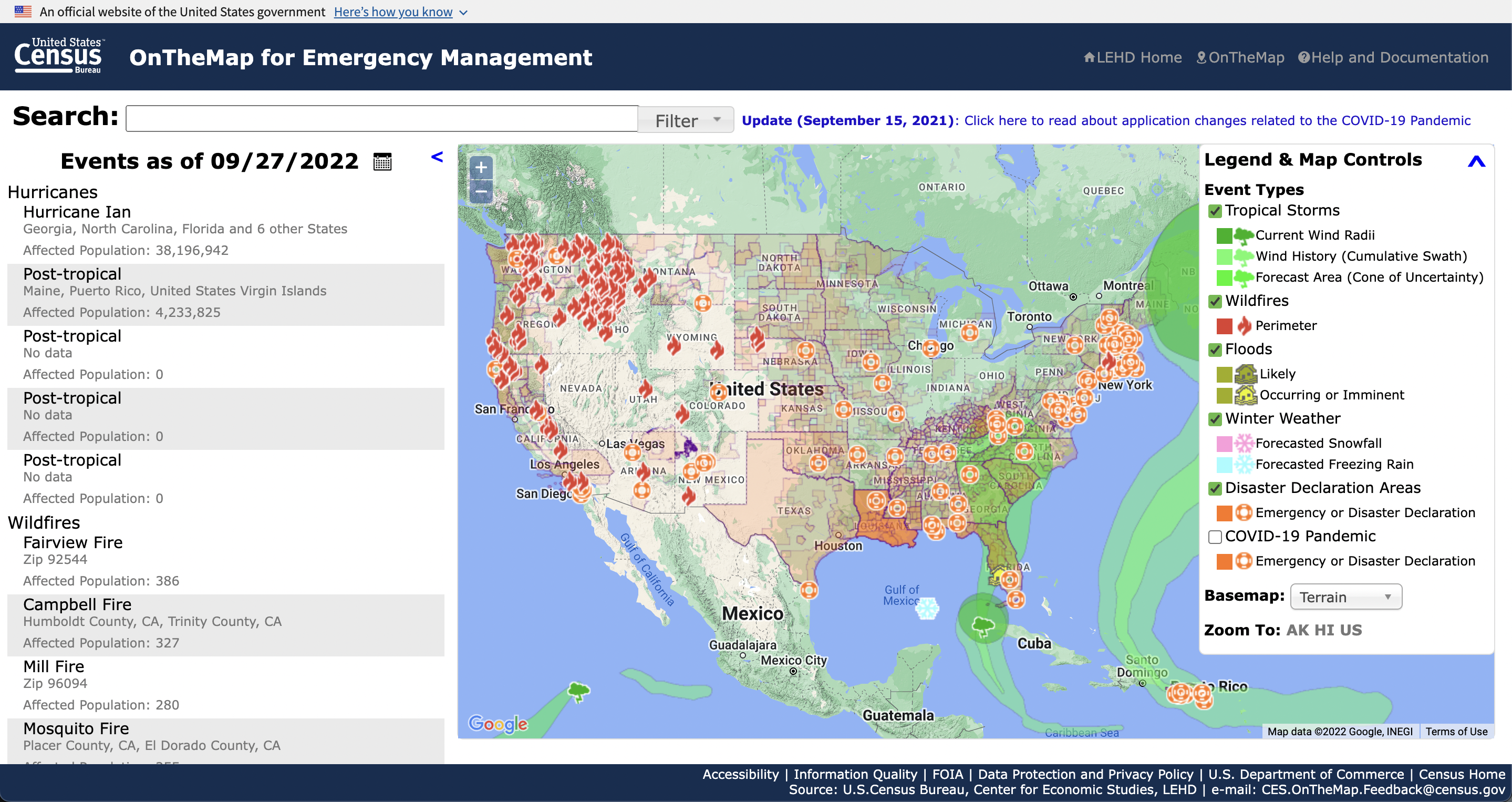 Another (older) tool that the U.S. Census Bureau employs is called OnTheMap which is a conglomeration of data provided by the National Weather Service, the Department of the Interior, the Federal Emergency Management Agency, and more (This tool can be examined in detail here.)

Now, you might be wondering: what's the difference between these two tools? They both deal with very similar subjects in terms of detailing potentially affected areas in the face of natural disasters.

The big difference is that OnTheMap has historically been about general demographics, but in contrast My Community Explorer was created and launched in 2022 to focus specifically on those more likely to be at risk, like the aforementioned "Community Resilience Estimates." This was the result of an Executive Order directed towards Diversity, Equity, Inclusion and Accessibility in the Federal Workforce. You might also notice that the latter has a far more accessible interface, serving as an easier visual for the demographics of affected areas than OnTheMap.

Overall, this is just one example of the application of census data, especially in a relevant period such as the current hurricane season. Cases such as these help to highlight why the American Community Survey's data is so useful and why Censtats chooses to help package it in simple to read formats.